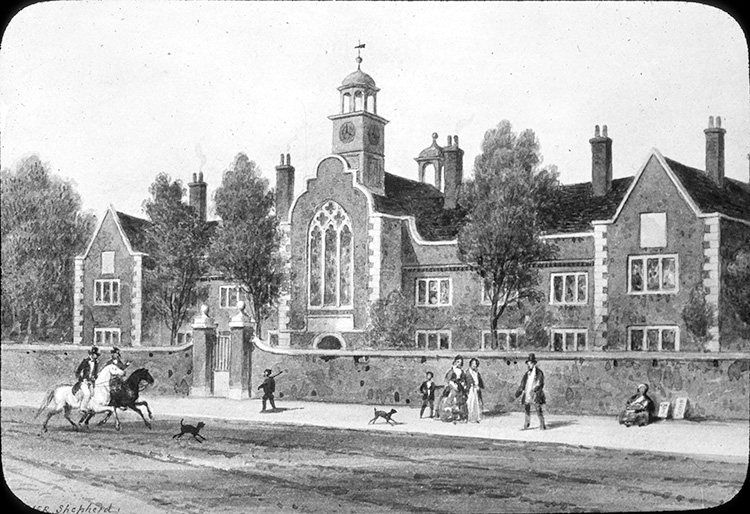 Magic lantern slide number LH24-86a. Captioned: Fishmongers’ Almshouses. Newington later St George’s Road. c1840 (watercolour).
Also appeared as plate 51 in Survey of London, volume 25: St George’s Fields (The parishes of St George the Martyr Southwark and St Mary Newington) (1955). The survey reports:
“The Fishmongers’ Almshouses, which formerly stood at the corner of St George’s Road and Newington Butts, were built in 1618 at the expense of several members of the Company on ground bought from Jacob Smith. John Aubrey relates that they were named St Peter’s Hospital by King James I ‘as he came by it from Scotland, in allusion to St Peter, the Tutelar Saint of the Fishmongers’. They were described in 1814 as ‘twenty-two neat houses in three Courts, with a garden behind, and having a neat Chapel’. South of them and within the same enclosure was another almshouse, founded by James Hulbert of the Fishmongers’ Company in 1719 for 42 men and women. The almshouses stood with but little alteration until 1851, when they were moved to Wandsworth.”
More details here.